As a part of my weekend visit to Atagawa Onsen, I decided to venture further south on the coastal train line to Kawaji. Thirty minutes inland by bus from there I discovered some of the most spectacular natural water scenery I have ever seen in Japan at a place called Nanadaru (meaning 7 waterfalls). To make it an even more perfect location, the area is also known for Nanadaru Onsen.

My day began with pouring rain! The rain wasn’t entirely unexpected as it is all part of nature’s cycle in Japan with the rainy season during June prior to the hot humid summer. The view from my ryokan had not improved overnight and I wished for gumboots rather than geta during my morning walk along the sea in my yukata! My spirits were not dampened though and not long after I checked out and headed for the train, knowing that I could move on an explore another area prior to having to return to Tokyo. The ryokan staff kindly drove me to the train station and 10 minutes later I arrived at Kawazu station and caught the bus to Nanadaru.

The bus trip was through beautiful lush countryside scenery stopping every now and then at points through the local rural community. There were only 3 of us on the bus, so it was like having a personal driver. Just before reaching Nanadaru, the bus winds its way over the Kawazu Nana-Daru loop bridge – quite a spectacular engineering feat! Not long after, we were kindly shown the best stop to get off at, which is at the Mizutare stop. This allows you to walk down hill through the mountainside vs a very steep uphill trek if you get off at the Kawazu Nanadaru stop. As soon as you step off the bus, you are soon in a beautiful mountain track heading down toward the river.

There are definitely silver linings in every cloud, as the massive downpour meant that the waterfalls were in full flow, resulting in breathtaking scenery, and fresh dewy air which was so refreshing physically, mentally and spritiually. 6 of the waterfalls were accessible and I captured the following images along the way.

Although it is difficult to make out from the pictures, each waterfall features a variety of rock features resulting from the lava flow 25,000 years ago when lava from the Noboriominami Volcano flowed into the valley.

Japanese often talk about ions and their impact. In Nanadaru, the tourist brochures referred to negative ions whereby oxygen atoms are charged with an extra electron. This is created in nature by the power of the natural energy emanating from the water, air, sunlight and earth. Health benefits include a sense of well being, normalising blood pressure, tension, improved sleep, energy levels and focus, reduction of headaches and sickness among many other things. Even without any scientific evidence, one could not deny the majestic power and energy of this incredible place….another of Japan’s secret and hidden places off the beaten tourist track!

I was interested to discover the origin of the naming of the trains running from Tokyo to the Izu Peninsula which are called “Odoriko”. This is named after the the short story called “Izu no Odoriko” (The Izu Dancer, 1926) by Yasunari Kawabata. Kawabata  was a recipient of the Nobel Prize Literature award in 1968. This is further evidence to me about the inspiring power of nature for the creative spirit.

The left image below portrays one of the images from the story. The image on the right is unrelated, but shows a wishing stone whereby people throw a stone and if it lands within the rope circle it is said to bring them good luck.

At the end of my trek, it was perfect timing for an onsen. After checking with the locals, I discovered Nanadaru Onsen Hotel, which is very close to the bus stop. Although the building has an older unassuming facade, the hotel does have a very nice little rotenburo overlooking the trees – unfortunately no waterfalls, but the beauty of the 6 I had just seen were still very fresh in my memory as I had a mid day soak surrounded by green and watching the raindrops gently patter on the leaves. 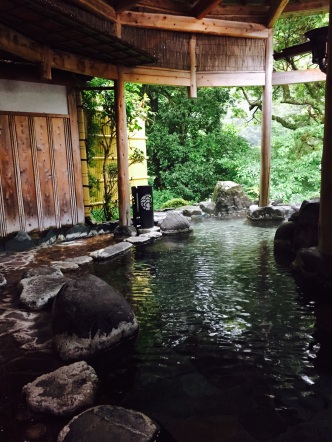 Shizuoka Prefecture is well known for its Wasabi. The Nanadaru area is particularly well known for its high quality wasabi and is featured in the stores. In the left image below you can see it in its natural form before being processed in its various forms as displayed on the right. 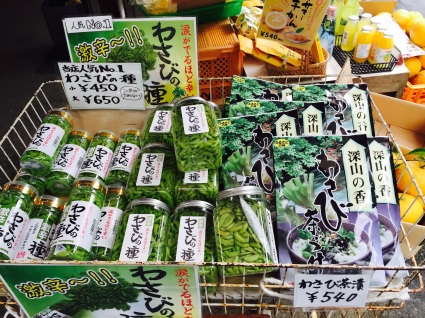 There was so much more to do and see in the area including walking through the Old Amagi Tunnel (longest tunnel in Japan constructed from stone and now designated as an important cultural asset), wander through magnificent promenades of Japanese Sugi (cedar) trees or having a meal at one of the traditional cafes in the beatiful natural setting. I was out of time however, and it was back onto the bus for the trip back to Kawazu station. Even on the bus trip I yearned to get off at a few stops as Kawazu is also an onsen area and there were a number of onsen centres and parks. Alas I will have to wait until my next visit perhaps for the spectacular Autumn scenery or the magnificent riverside cherry blossom displays in Spring.