Located at the tip of the Izu Peninsula, approximately 2.5 hours by train south west of Tokyo, Shimoda is a beautiful coastal city surrounded by magnificent coastline and lush countryside. It is renowned as the location where Commodore Perrry sailed in on the black ship in 1854 and signed a US-Japan treaty of Peace and Amity. This historic event effectively ended a period of isolation of over 200 years whereby Japan had closed its doors to the world, and began a whole new period of Westernisation in Japan. Unlike Perry, I arrived into Shimoda by  express train, explored a little of the coastline  on a replica of the black ship and focused my international exchange in the bathhouse arena following the discovery of a couple of wonderful onsen which I will write about over 2 blogs.

Arriving in Shimoda, I could feel immediately that it was a beach resort area, as the shops surrounding the station were full of surf gear, floral dresses, bathing wear and accessories. It was early June and 26 degrees celsius, so the perfect weather to get into the summer mood and explore this town.

I had come to Shimoda as a destination, and had not yet decided on which onsen to visit, so I wandered down to Perry Road to soak in the history. It was like stepping back in time as I discovered a beautifully preserved street along a small canal, with old buildings dating back to the 1860’s. 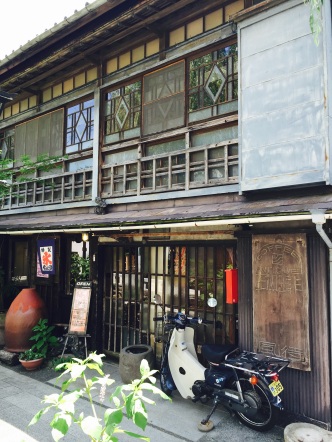 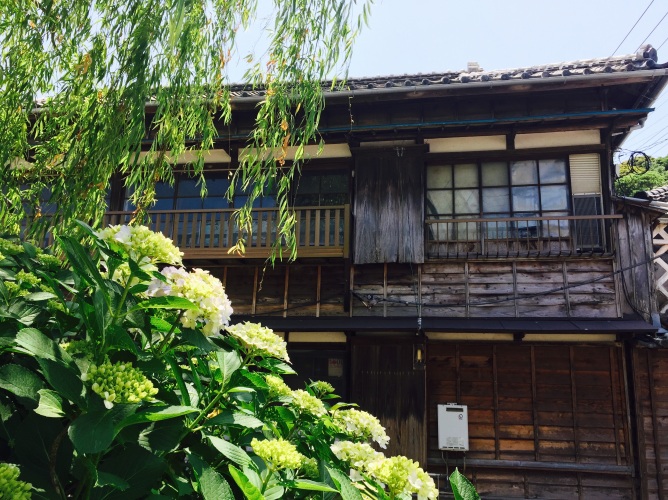 The ajisai (hydrangeas) were just beginning to bloom and were quite picturesque. Early June is a popular time to visit Shimoda area as there is an ajisai matsuri (hydrangea festival) in the nearby Shimoda Park. I also had a walk (well hike actually!) through the park, and was treated to magnificent views over the city, however the blooms were still coming out.

After my journey from Tokyo, followed by the city and park walks, I was well and truly ready for an onsen. I checked into my ocean view hotel, and tried out their onsen, but was disappointed that the ocean view was obscured by clouded privacy windows – how unfortunate that in keeping the guest privacy, that we had to miss out on the magnificent views…..

I decided it was time for plan B, so I took a taxi to Kanaya Ryokan, which features a bath called Sen nin buro (1000 person bath). Intrigued? I was!

Founded in 1866, this historic inn is located a few kilometres inland, and is close to Rendaiji which is one stop from Izukyu Shimoda station. It is full of history and charm with unique architectural features and wooden interior featuring extensively within. Luckily they also open their doors to day trip visitors. 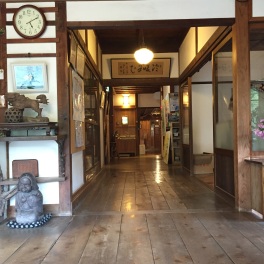 There are 2 bathing areas, one female only, and uniquely, the men’s bathing area is technically a mixed bath. In most cases I have come across, there are men’s only, women’s only and sometimes mixed gender.  I  initially ventured into the onsen thinking that I would only use the ladies bath, but curiosity got the better of me, and I decided to venture to the other side!!

An adventure – crossing to the “other side”

From the ladies bathing and changing rooms, there was a little wooden door with 3 keys on it. At the reception desk, the lady had informed me that if I wanted to go into the mixed bathing area, I could simply enter through this little wooden door, and I would be on the men’s side! It was OK for me to wrap one of the larger towels around me when I entered, but not to forget to take the key as the door would lock behind me, and I would not be able to return to the ladies side! Ironically the key is to keep men out of the ladies side, but it is OK for ladies to go to the gents/mixed side!

I took a deep breath and turned the key….there was no turning back…a few of the gents heads turned as I entered and I am not sure who got a bigger suprise. My head held high and towel wrapped firmly around me, I entered and waded through the water and sat on the step at the far side of the bath. The bath was magnificent – 15 metres in length and 5 metres wide and thus probably the reference to “1000 person bath”.  All of the baths, ceilings and walls featured hinoki, a Japanese variety of cypress. Well, I have to also admit that some of the men also provided a nice feature, but admittedly I tried to avert my eyes and focus on the ceilings or mediate on the water! Below is a copy of an image from a promotional brochure.

My whole experience on the other side lasted only about 5 minutes. I stood up with my now soaking wet large towel still wrapped around me precariously as I began my walk back toward the little wooden door.  I had been surprised that the towel was allowed in the water as usually it is not…unless I got that part wrong and I was meant to drop the towel as I got into the water – oh well!  I fumbled slightly with the lock and voila, the door opened and I let out a big sigh as it closed safely behind me!

The whole experience was exciting but also somewhat nerve racking. 5 minutes after I had returned to the ladies side, I heard French voices coming from the other side. One was likely a work colleauge of mine that I had met coincidentally on the train, and I couldn’t help wonder whether or not he would have been surprised to see me on the other side had our paths crossed again when he walked into the bathing area!

Konyoku (mixed bathing) has now decreased quite considerably in Japan after it being very much the norm up until the beginning of the Westernisation of Japan after the arrival of Commodore Perry and the black ships. Westerners were aghast at the “immorality”of mixed gender and age bathing and Japan soon changed some of the practices to improve their image to the outside world. That leads to a whole other story and reflection, but it is one that I could not help ponder on following this very unique experience.

Stand by for day 2 of my Shimoda experience in the next blog.

From Tokyo station take the Izu Kyuko “Super View Odoriko” or “Odoriko” to Izukyu Shimoda station. (Approximately 2.5 hours).  If you are visiting Kanaya Ryokan, get off at Rendaiji which is one stop before Izukyu Shimoda.