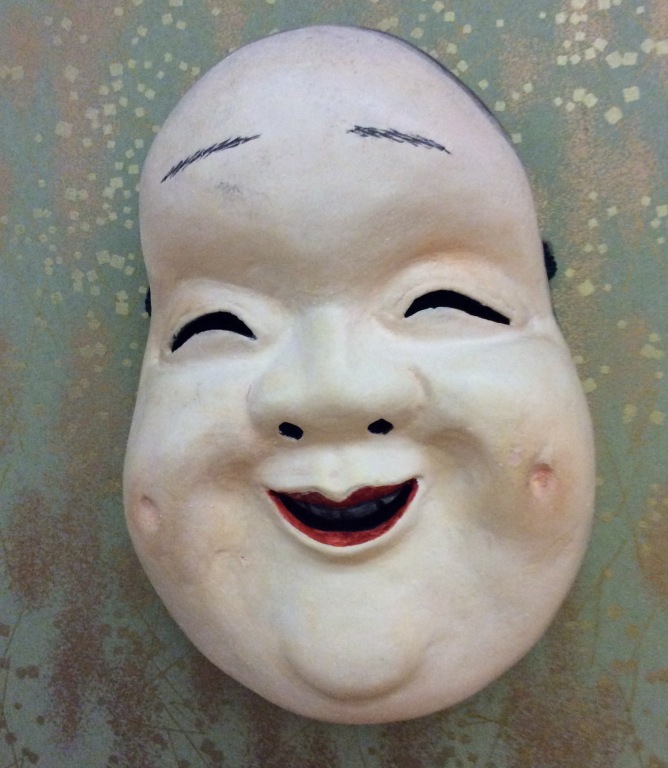 An overnight stay in Gero Onsen is highly recommended as there is plenty to see and do around the town itself. There are also options of scenic day trips including Hida Takayama, Shirakawago, or slightly further afield to Kanazawa and Matsumoto. My goal was to stay in town and head to the Gero Onsen Gassho Mura, which is a tourist site featuring 10 taditional thatched roof homes forming a unique outdoor museum. But first I had an interesting breakfast experience.

Fugu for breakfast anyone?

Bosenkan ryokan included a meal package so I had a full Japanese traditional breakfast. I was suprised, however, to see fugu on the menu! As a foreigner, you will often hear the horror stories of fugu and the perils of its poison if not prepared properly. Indeed, chefs must undergo rigorous training to be licensed to safely prepare and serve this fish, but somehow despite  knowing this, I wasn’t exactly attracted by the idea of fugu for my Sunday morning breakfast! Nevertheless, I gave it a go – it tasted quite like chicken….I was still breathing a few minutes after my first bite, so a had another few mouthfuls and washed it down with my bowl of miso soup. 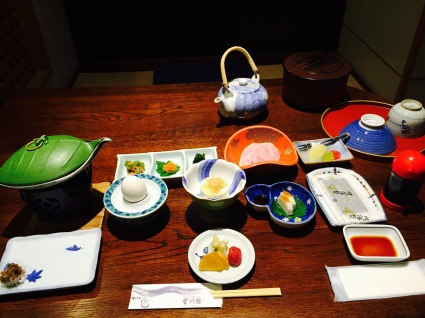 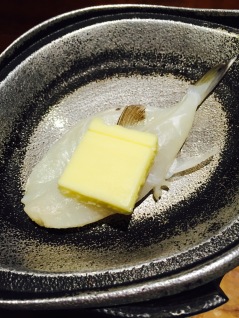 Having already had the pleasure of staying in these traditional homes in both Shirakawago and Gokayama last year, I had almost thought to skip this destination. I am so glad that I didn’t as I was captivated yet again by their beauty and charm. The village was beautifully put together and although a tourist park, the traditional feel was well preserved with very few tacky distractions. In addition to the beautiful gassho homes, there were so many other things to see and experience.

Nothing beats the look of pride and joy of a dedicated artisan with decades of experience. Inside the first traditional house, I came across a wonderful gentleman who was busy handweaving geta with fabrics and straw. He pointed to the tiny hand woven Geta and informed me they were the smallest in Japan, and made by people who were 80-90 years old….wow! The work was so intricate and detailed. It made me think of grandmothers crocheting booties in western countries, but the intricacy was on a totally different level.

The other fascinating trivia I learned was that traditional geta were made so that all 5 toes hung over the edge so they could fully grip the ground – I am guessing this was more relevant for the warmer months rather than the snow though. I could have easily stayed and chatted much longer. As always there is so much more beneath the surface of so many things in Japan. 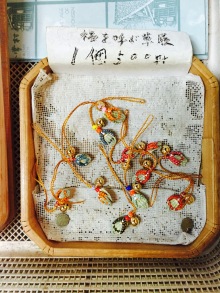 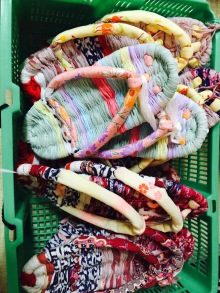 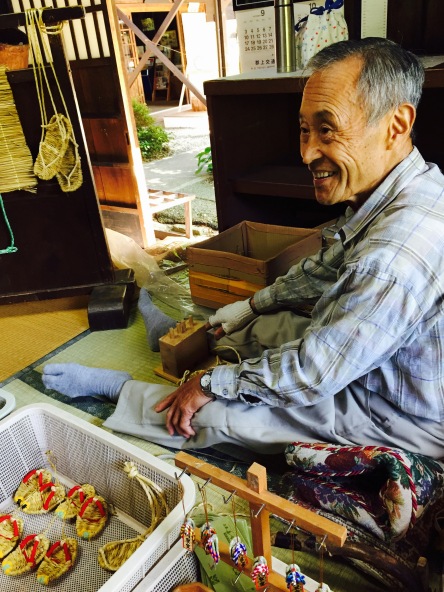 There are many footbaths dotted throughout the town of Gero Onsen, each with a different character.  Having not tried any of them to date, I made a point of stopping to experience the Gassho no Ashiyu in this charming village. 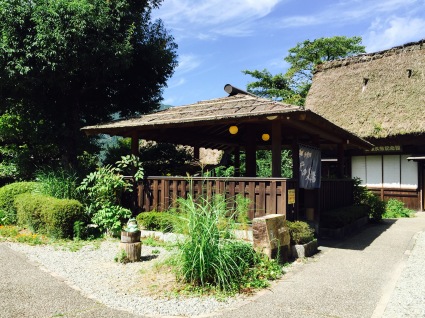 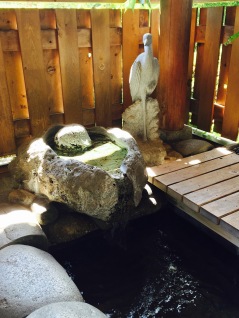 Time passed by quite quickly as I meandered in and out of the 10 thatched cottages. One of may favourite homes, featured a cafe and gallery, so I enjoyed a beautiful Japanese tea and sweets set featuring matcha, adzuki beans and fruit. Also featured within this cafe was a traditional irori (hearth) where by food was traditionally cooked over the coals. Kettles and pots are hung by a suspended pole for boiling and simmering. Fish is also often skewered and grilled in the hearth. 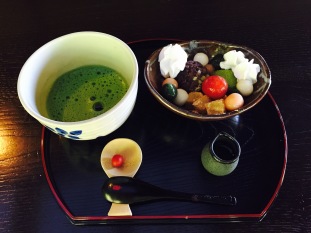 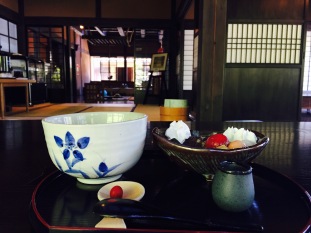 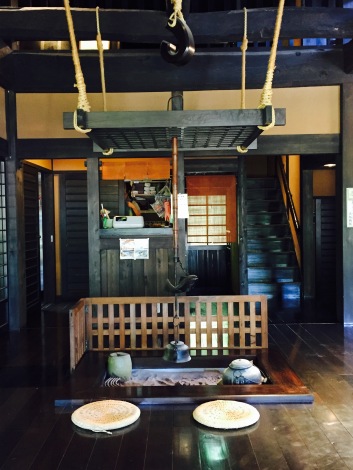 Througout the village, I was captivated by a number of stunning views. The concept of framing is so simple, yet so stunning with the outside vibrant greens providing a contrast to the dark interiors of the traditional homes. 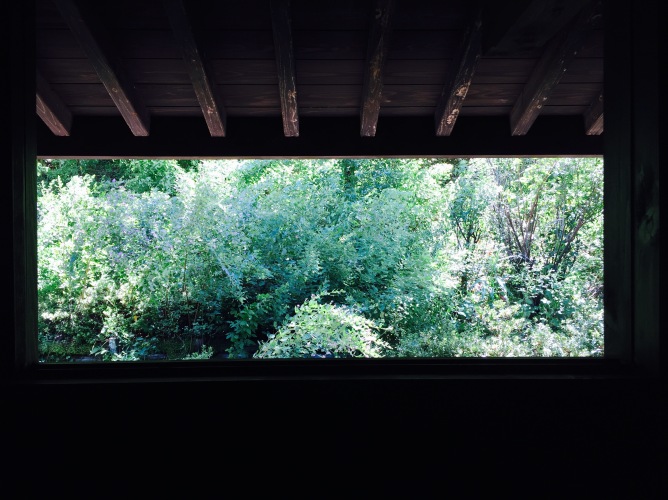 As I was getting ready to leave the village, I came across another unexpected surprise – an old style Japanese theatre featuring shadow plays. Tickets were 300 yen each for a 40 minute performance which covered 2 plays. The first play was about the legend of the heron who guided the town’s people to a new location of a hot spring in the river bed following the collapse of the mountain hot spring. The second play featured lots of animals and birds. Photography was strictly forbidden during the show, but the images below give some idea as to the concepts. Together, 3 main cast members use props and their bodies in various poses behind screens to illuminate stunning pictorials of the stories. Another first for me in Japan and I was thoroughly captivated and enchanted. 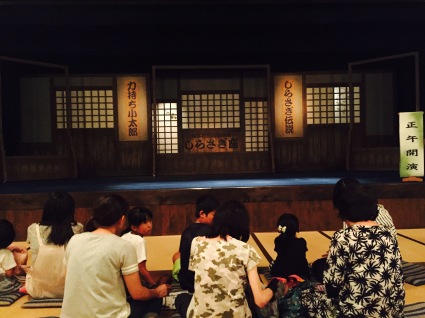 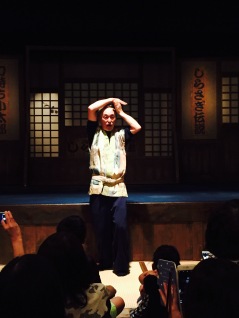 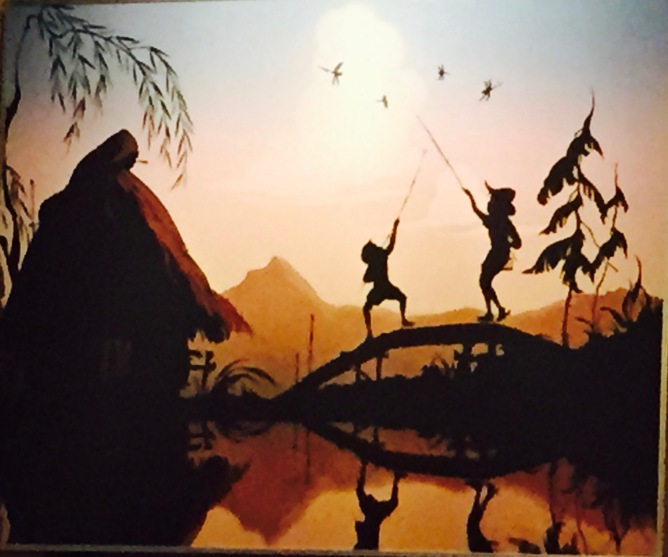 Following a great morning at the Gassho-Mura, it was time to fit in one last onsen prior to catching the train back to Tokyo. Ogawaya had been recommended to me by the Tourist Centre and ended up being my favourite! I was only sorry that time was so limited.

Again, Ogawaya is a very large onsen establishment and had a beautiful foyer featuring a water screen. I checked in at the front desk and was referred to the lower floors where the onen were located. 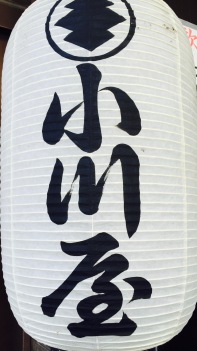 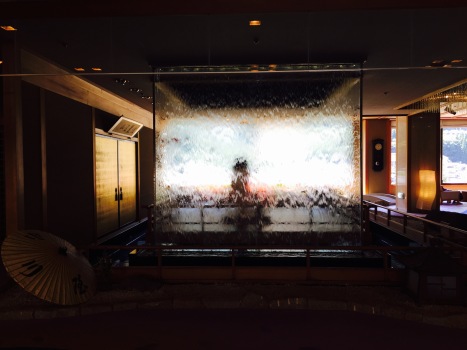 Tatami mats in an onsen?

I was very surprised to find the onsen floor was covered with tatami mats. Generally onsen flooring is tiled or wooden, so this was a first for me. Although I didn’t have much time to investigate the tatami mats in detail, they were obviously a waterproof version but for all intent and purposes, they had the look and feel of regular tatami mats. The tatami surface was very comfortable to walk on and was less slippery than wood or tiles. Having said that, it did feel quite weird to be sitting on my little stool washing while on tatami mats! Another new experience! 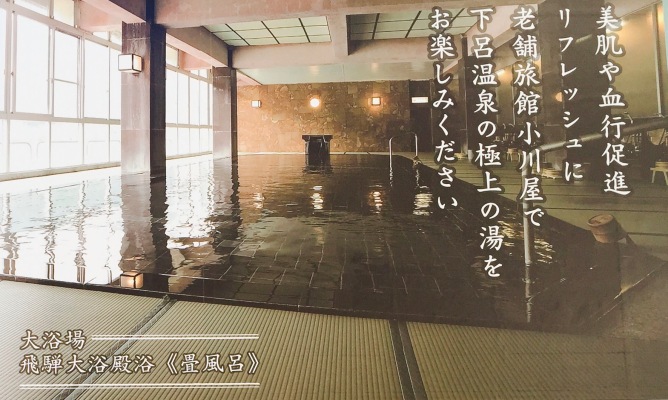 The baths, both inside and out were quite beautiful at Ogawaya. Spa baths and sauna facilities were also available. My favourite was the outside milky bath that was silky smooth on the skin. If you ever try one of these milky colored baths, be very careful as you cannot see below the surface of the water at all. Stairs can be quite dangerous, but on the flip side, for those who are self conscious, your body literally disappears beneath the surface of the water.

What a perfect way to end a magic 2 days in Gero Onsen! 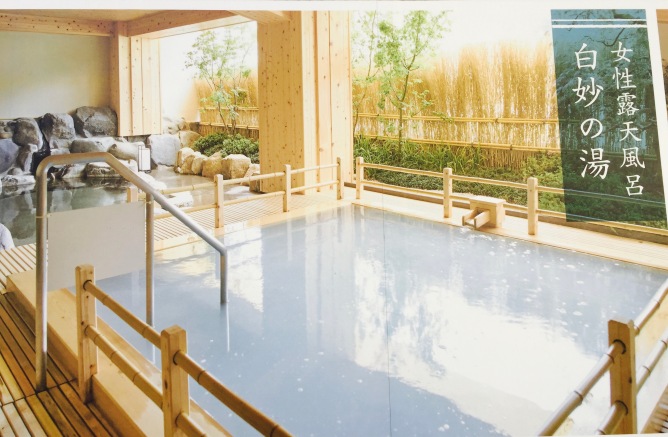 From Tokyo, take the Shinkansen to Nagoya (101 minutes). Change to the Hida (Wide View) train line and get off at Gero Onsen station (105 minutes).